BeAGLE uses the DPMJet framework in order to handle the target (Glauber, FLUKA etc.) for ep and eA collisions but employs PYTHIA to handle the elementary interaction as a replacement for PHOJET. The nuclear PDF is included by linking the PYTHIA PDF library to LHAPDF which enables us access to EPS09 nuclear PDF routines. We have included the energy loss module PyQM, written by Accardi and Dupre and based on the quenching weights of Salgado & Wiedemann. This module, when turned on, applies energy loss to the partons after they have been simulated by Pythia, but before they have been hadronized.

The original DPMJet models DTUNUC, PHOJET, QNEUTRIN are NOT available in BeAGLE. If you are interested in these models for pp/pA, real photoproduction, or quasi-elastic neutrino scattering, use DPMJet directly. The history and motivation of the use of DPMJetHybrid rather than DPMJet for eRHIC can be found here.

A graphical demonstration of the program structure can be illustrated as follows: 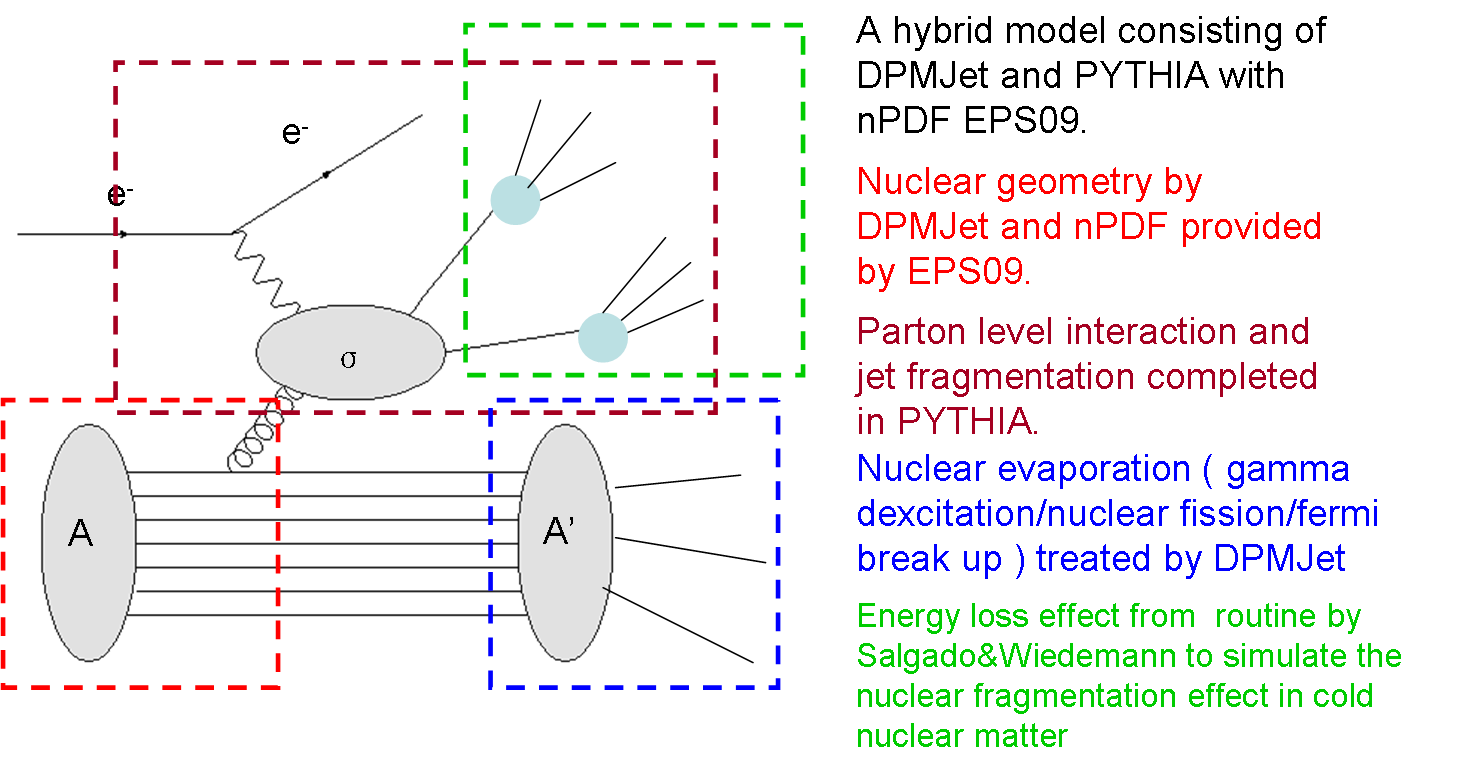 The program can be run in, essentially, two modes.

Setting genShd=1 (generator Shadowing=1) is similar to DPMJetHybrid. The entire nuclear shadowing effect (where R=σ(A)/Aσ(p)<1) is interpreted as a change in the parton distribution of unspecified origin, but the DIS interaction is assumed to be point-like. One and only one nucleon participates in the interaction.

Note: This approach is in stark contrast to the original DPMJET approach which used GMVD (Generalized Vector Meson Dominance) and allowed multiple collisions.

Setting genShd>1 (specifically 2 or 3) activates a very simplistic model of nuclear shadowing loosely based on the dipole-model or aligned-jet model. Even for DIS events, the scattering process in the target rest frame is viewed as being due to a rare hadronic fluctuation of the virtual photon with a very large cross-section (few mb). In this case, the entire R(x,Q2)<1 shadowing effect is attributed to multiple nucleon collisions. Viewed in the hadronic center-of-mass frame, such collisions can still look like conventional DIS.

We implement this by making a map, outside of BeAGLE, using TGlauberMC between the “dipole” cross-section σ and the value of R. When running BeAGLE, we look up R in the nPDF (such as EPS09) and find the corresponding dipole cross-section. Using the dipole cross-section, we can then simulate the collisions with Glauber, leading to a variety of Ncoll values. If Ncoll>1, we currently pick one of the struck nucleons to undergo a Pythia interaction (for genShd=2, this is a random choice among the struck nucleons; for genShd=3 it is the first struck nucleon seen by the γ*). Any additional struck nucleons undergo an elastic scatter with the most forward parton (in the direction of the γ*) with a pt magnitude of a typical intrinsic kt.

At the moment, there are many simplifying assumptions for the multinucleon mode, made for convenience, which we hope to systematically relax as we upgrade the program. These include:

Infinite coherence length even at modest x.
We apply an overall multinucleon effect based on the Rsea(x,Q2) independent of process.
Note: Processes such as Photon-Gluon Fusion should depend of RG while diffraction should INCREASE as R gets smaller.
We assume that the full shadowing effect is due to multinucleon collisions with no modification of individual nucleons.

How to run BeAGLE, step-by-step instructions

There are two central managed directory/repo stored at BNL,

Source setup_BeAGLE to setup your environment variable $BEAGLESYS, which will point to the BeAGLE directory, e.g., the PACKAGES directory. One can also source the same thing under the gitstore version.

when done, $BEAGLESYS/BeAGLE will be the executable.

The executable will be under the main directory, called “BeAGLE”. So instead of running the executable from central directory, one runs from here locally. See later on running instructions.

Create your own output directory,

Copy and paste the macro to convert text output to root output, e.g.,

To run BeAGLE, do this following command under the main directory,

Go back to main directory, and run:

the root file will have the same name as the txt file.

To analyze the root file, one can loop over events AND particles and do analysis. One example macro is provided under

Grab necessary parts for what’s needed. Then simply do:

The filename is without the .root extension. Note: In order to access EventBeagle (which is defined under EventPythia.h), and besides to setup eic_cshrc, one needs to setup include path to /afs/rhic.bnl.gov/eic/include, For example, if one is not sure, open root, and try,

See if -I/afs/rhic.bnl.gov/eic/include was added. If not, you need to add the include path.

Note: This input file (originally from DPMJET) is very particular about the spacing of a lot of the numbers so make sure that you leave the starting space the same when you change numbers. In particular, the input format is: A10, 6E10.0, A8

The USERSET are defined as in this link. Be patient, it will need 30 secs to load the source code. For example, USERSET==16 is to save the information of the Deuteron wavefunction.

The format of the PY-INPUT file is similar to the Pythia input file, which is not really documented elsewhere, but is fairly self-explanatory due to the comments. See below.

The usage and explanations for the parameters in the input file and what kind of parameters do we need to give for PYTHIA can be found in the following file:

To find the final state particles, just use the following selection rules:

which selects all the particles from hard interaction, nuclear evaporation and heavy nuclear fragments.

The BeAGLE output is a text file intended to be read in by eic-smear and EicRoot at BNL and by GEMC at JLAB.

For the output file, we propose the following text format & structure:

The information from line 7 to X repeats for each event.

Something to be mentioned here is the first 4 tracks in every event which deliver the information of beam parameter are added externally in order to get some handy variables like z, ptVsGamma… So the mother daughter relationship of these four tracks can not be taken too seriously. But the orig number and daughter number of the tracks after those 4 tracks are consistent and can be used for further purposes.

The 4-momentum for particle I, PHKK(mu,I) is reported in the lab frame for all stable final state particles. It is also reported in the lab frame for most intermediate/document particles with the following exceptions: Particle 5 is a copy of the γ* with 4-momentum reported as zero. Particles 6 through A+5 are the incoming original nucleons from the A, in the target rest frame with γ* momentum along +z. The momentum corresponds to the Fermi momentum of the nucleon in question.

The impact parameter, defined as the transverse position of the virtual photon with respect to the nucleus center in a frame with z along γ*, is given by bx=VHKK(1,5) and by=VHKK(2,5) in mm.

The status codes ISTHKK(I) have the following meaning. Note that final state particles have status 1 (although internally -1 and 1001 are also used). All other statuses refer to intermediate particles or informational lines.

The NOBAM particle origin flag for final state particles has the following meaning: